It is almost impossible to imagine that education was once only synonymous with chalk, blackboards, heavy books and reference anthologies. Indeed, the current state of education has left tradition behind, with the internet and technology on the whole playing a pivotal role in the lives of both the teachers and the learners. In a country like India, where demand and supply are in a constant state of tug of war, the internet can perhaps open greater avenues of learning for the masses.

With the cut-off lists for admissions in prestigious government colleges inching closer and closer to 100% with each passing year, the entry of all deserving students in formal education has become a real challenge. Although the private-sector institutions do offer an alternative however the poor quality and exorbitant fees being charged by some of these institutions make them a less favoured option.

E-Learning: Need of the hour

As per latest government estimates, the gross enrolment ratio (GER) in higher education is only about 20.4% with a total enrolment of 28.6 mn students across the country. In comparison, the average GER in western countries is above 65% despite the higher costs of pursuing graduate and post graduate studies overseas. In terms of physical infrastructure, the country boasts of more than 720+ universities and 37,000+ colleges at present, with the National Knowledge Commission predicting the requirement of an additional 700+ universities to meet the GER target of 30% by 2020 set by the government.
Given the current state of the economy and lesser priority accorded to education sector for public funding in the past, achieving this target seems like an uphill task for the country especially given the massive investments required in physical infrastructure. The Indian private sector on its own would not be able to take up this challenge due to various reasons such as mandatory not for profit operations, access to low cost financing, etc. The foreign universities are still awaiting the nod from the government to set up an Indian campus.
In this context, quality industry focused online education can come to the rescue of the students.

According to the Oxford University Press, MOOCs are courses of study freely available on the internet to a very large number of people. Such online courses make the interactive learning experience a distinct reality. As per academic experts, the open and interactive platform MOOCs will not only provide millions of students from across the world access to the best study material but also to the best instructors. In terms of cost, such online courses are either available for free or for very nominal fees.
In India, the concept of online education and MOOCs are relatively new. However, they have managed to gain significant traction amongst the students, teachers and regulators in a short time. As per analysts, the online education market in India is expected to touch $40 bn by 2017 from the current size of about $20 bn. Further, as per a recent survey conducted by Coursera, world’s largest MOOC provider, Indian students comprised of the second largest group taking MOOCs on their website after American students. 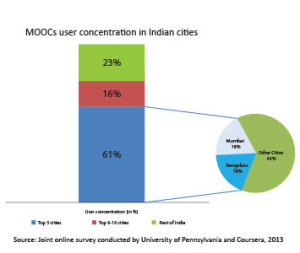 Access to internet is one of the primary requirements for MOOCs. The internet penetration rate in India is dismally low, especially in rural areas, as compared to other countries which needs to be addressed immediately. The National Optical Fibre Network (NOFN) which seeks to connect all villages by 2017 hopefully should be able to address a part of this problem. 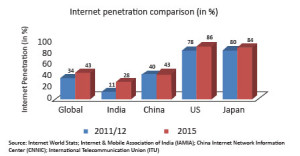 Another major challenge for the success of MOOCs in India will be the relevance and recognition of such courses by the government and industry. As per Coursera survey, about 96% of all students who registered for an MOOC failed to complete their courses. This trend can be attributed to lack of recognition of such courses by authorities/industry and the general perception amongst students around the value of MOOCs.

Given the enormous potential of MOOCs in solving the higher education issues in India, it is imperative that the government and industry come together to chalk out a roadmap for successful integration of these courses within the overall higher education system. The IITs have already embarked on this journey by offering MOOCs in collaboration with Google and Nasscom, the others are expected to follow soon. It is therefore important that the Indian government takes up e-learning on a high priority to make it an attractive proposition for all the stakeholders.